Photos Of The Forgotten Bengal Famine Fueled By British Colonialism 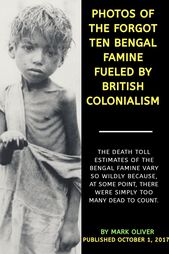 But the war made things far worse. Life in Bengal became a horror show after Japan invaded Burma. Burmese refugees fled into India for shelter, and Japanese bombing raids followed on their heels. Fields were destroyed, the population grew, and what little food the people of Bengal had was stretched even further.

Like 0 Thanks! You've already liked this
No comments
« 60 Funny Furry Animals To Brighten Your Day | FallinPets » The Best Design for a Round Mallet, Part 2: My Family of Mallets | Popular Woodworking Magazine